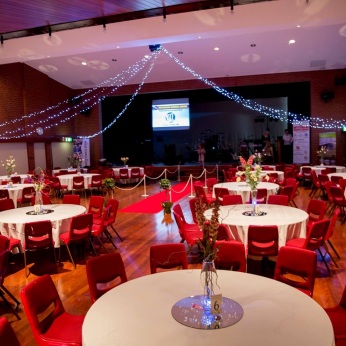 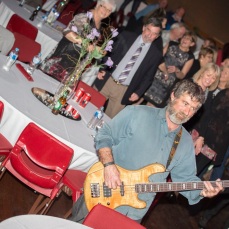 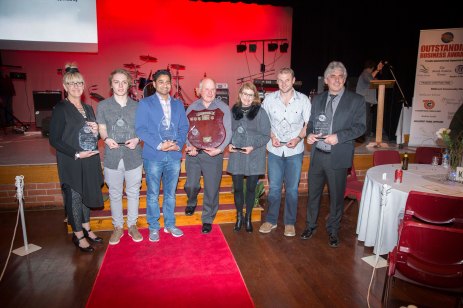 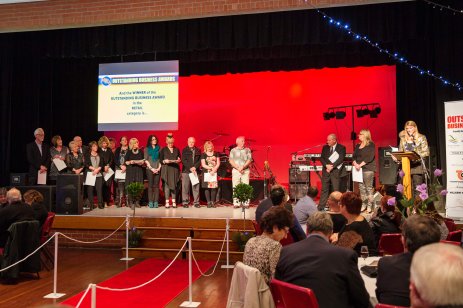 Fosters Foodland was honoured with a standing ovation from the 245 strong crowd attending the MBCA Cabaret Awards event as they were announced the 2015 Inductees to the MBCA Hall of Fame. Foster’s is  a family owned and operated local business of 68 years and one which has a proven commitment to community through their founder the late Bob Foster, Brian for many years and more recently David. This was one of the two Awards received by Fosters Foodland but as Brian said later, the Community Spirit Award in honour of his father Bob, was really something special to receive.

The Millicent Business Community Association turned on all the glitz and glamour of a red carpet event to showcase Millicent and District businesses and their employees with a 245 strong crowd almost filling the Civic and Arts Centre to capacity. 5THE FM’s Rebekah Lowe  (and MBCA committee member)  hosted the evening introducing MBCA Chairman Margaret Chapple to officially open the 5th Annual Awards Cabaret.   Ms Chapple thanked the community for supporting the event saying she never thought her biggest  concern in the lead up to the event would be fitting everyone in and congratulated the community for supporting the event.

The decision to hold the annual award event as a red carpet Cabaret,  had paid off Ms Chapple said;  former Chairperson Mike Reilly had envisaged such an event and look, she said, “we made it happen.”

The event was primarily to announce the award winners and celebrate all nominees but also to showcase local business with the MBCA enlisting local food industry businesses to prepare supper and provide bar facilities. Platters were purchased from the Community Club, Andy’s Bakery, New Heaven Indian Restaurant, The Balcony Cafe, The Somerset Hotel, Shearers Cook Cafe and the Somerset Hotel provided the bar.  Komma Media provided media facilities including a video of the event which will be on the MBCA website shortly.

Judges experienced in business awards formed the judging panel again with Sheryl Lowe chairing the panel  for the past 2 years. Mike Ryan and Glenn Brown have been on the panel for the 5 years of the awards, Rob Forgan joined the panel 2 years ago.

Federal Member for Barker Tony Pasin sent a letter of congratulations to the MBCA on the Awards event but was unable to attend this year.

Ms Chapple said nominations exceeded all expectations this year with 94 nominees representing 41 businesses and 53 individuals. Nominees were presented to the crowd walking the red carpet to receive a Certificate of Nomination from the MBCA Chairperson.

The MBCA Awards consist of 4 Outstanding Business Awards and 2 Employee Awards and the winners are:-

Major sponsors of the event were Wattle Range Council, SE Times and 5THE FM all contributing in excess on $1000-00 each in total in services.